What to expect on an 18 to 29s adventure in Egypt 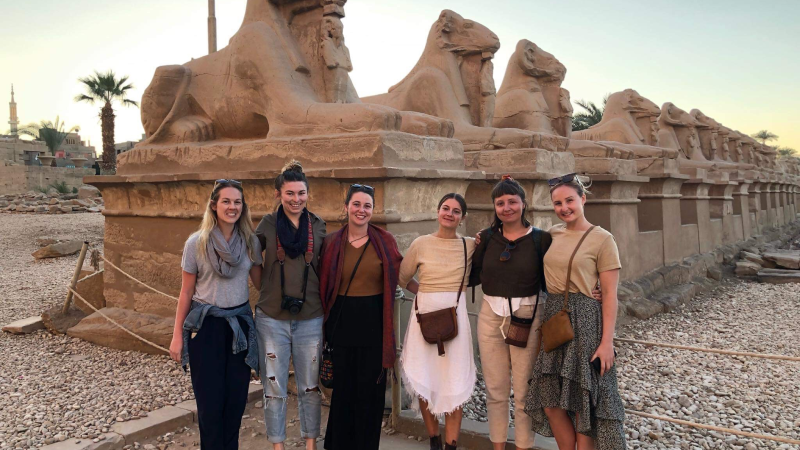 Looking to discover the incredible history behind one of the world’s most impressive ancient civilisations? Experience it all on Intrepid Travel’s Essential Egypt tour.

Sure, the Romans had amazing achievements and I guess we should give the Greeks some credit too. But, in my mind at least, the Egyptians were the most captivating ancient civilisation in the textbook. The opulence of the pharaoh, the monuments built to the gods, and the attention to detail when it came to preparation for the afterlife – you just can’t surpass Egypt when it comes to history.

And we didn’t go a day without touching ancient history on our 18 to 29s adventure. On day one, we were taken to explore the Pyramids of Giza with their nose-less guardian. You’d think that these mind-boggling structures, the only surviving member of the Seven Ancient Wonders of the World, wouldn’t be able to be topped. But throughout the tour, we visited new sites, each with their own unique story to tell.

From the evidence of a jealous pharaoh carved into the walls of the Karnak Temple to the boy king’s funeral mask at the Cairo Museum. We uncovered Egypt’s impact on the ancient world in every way and all without a trace of “European Church Syndrome” (if you know, you know).

But, if I had to give one recommendation here – take the optional excursion to Abu Simbel. Yes, it’s the priciest thing you’ll have to buy on tour and yes, it’s a very early start. But when you round the corner and see the gods carved into a 20ft cliff face, you’ll thank me (once you’ve picked your jaw up off the ground).

RELATED: 7 EXPERIENCES EVERY TRAVELLER SHOULD HAVE IN EGYPT 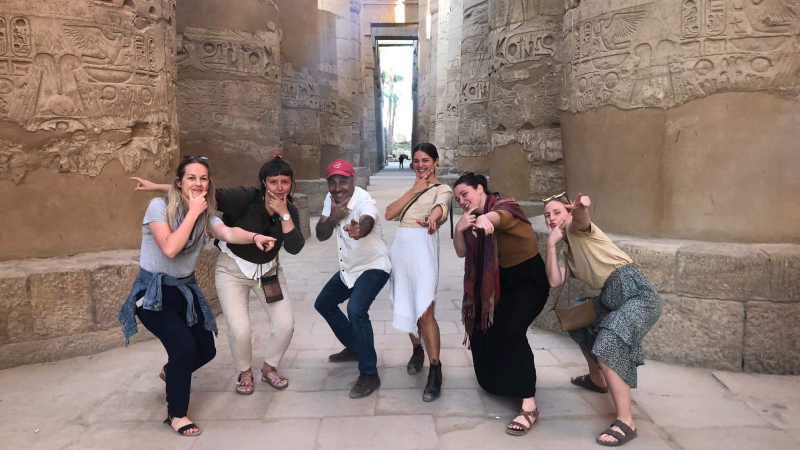 Striking a pose at Karnak Temple with local leader Hassan

Egypt’s history and culture didn’t end with the ancient Egyptians. For every temple, we also visited a bustling market. For every godly legend heard, the call to prayer would sound out. On our 9-day itinerary we visited three of Egypt’s busy cities; Cairo, Luxor and Aswan and every step of the way, we had our energetic guide Hasaan leading us.

Hasaan would tell us how much we should haggle for a pashmina, de-mystify the practice of “baksheesh”, show us where to get the best falafel, explain the tradition behind that pungent fish odour we suddenly all smelt and more. A temple became more than crumbling ruins when we were shown around by someone who had grown up playing hide and seek among its walls.

RELATED: HOW TO SPEND THE ULTIMATE WEEK IN EGYPT

And we met people that we would have otherwise never had the opportunity to. One of the highlights for everyone was a dinner with a local Nubian family. As we feasted on NFC (Nubian fried chicken), tagine and moussaka, we learnt about Nubian culture, history and modern life from JayJay and his family. Their wedding photos were proudly passed around alongside cinnamon tea and baklava, and we practised English with their young son in exchange for a few simple words in the Old Nubian language. Travelling from one end of the country to the other and back in the space of just nine days may seem like a lot of time spent on a bus, but our tour maximised time by combining transport with accommodation. The overnight train from Cairo to Aswan was an exciting experience for someone who had only ever associated night-time travel with “sleeping” upright and fighting over an armrest with a stranger. As we rattled southbound, an attendant served dinner and made up our sleeper bunks while we played cards and enjoyed some downtime. And I’ve definitely slept worse!

RELATED: FELUCCA VS. RIVERBOAT – HOW WILL YOU DISCOVER THE NILE?

Overnight on a traditional felucca ship promised a day of sunshine and hearty food as we sailed down the Nile. While the winds may not always favour a long journey (we managed 5km in 24 hours), it certainly delivered a memorable experience. After toasting the sunset with our new group of friends, a small campfire celebration on shore was suggested where we danced and sang the night away. Whoever said that it’s not the destination but the journey could well have had a similar felucca ride! 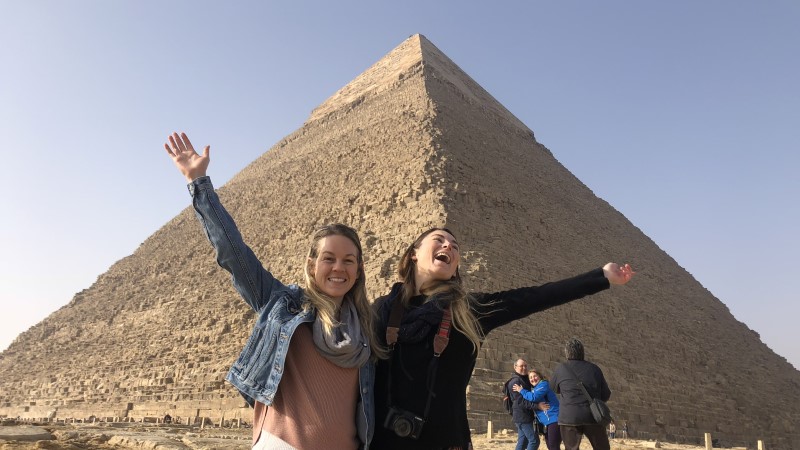 Danielle and her pal, Katie, enjoying a trip to the Pyramids

Short on cash but not on energy – it’ the eternal conundrum for many young travellers. Our 18 to 29s adventure gave us an opportunity to get the most out of both. We always had the flexibility to choose which optional activities to join and having plenty of free time built into the itinerary meant we would only pay for the things we really wanted to. And when we did, we were always bowled over by the affordability of Egypt.

RELATED: EVERYTHING YOU NEED TO KNOW ABOUT TRAVELLING IN EGYPT

Food was a highlight, indeed many of us reached what could be considered the human limits of koshari consumption. This deliciously, carby dish of lentils, pasta and tomato was a cheap and filling meal, usually only cost a pound or two with a cold drink. Trips to the local kebab shop were another hit – a falafel pitta-pocket lunch would set us back around £0.20. Yep, just 20 pence!

Truly, the hardest part was returning to life in London (and its prices).

Looking for a unique cultural experience to set me apart from my fellow countrymen, I left my country Australian town for life in London. When I’m not hearing an Aussie accent around every corner, I’m usually found delighting over dogs, thinking about Harry Potter and planning my next adventure in this wonderful world.