Explore the gem of South Australia

This is as real as Australia gets – kangaroos around every corner, towering eucalyptus trees, out of this world wildlife and welcoming locals. Spend five unforgettable days exploring Kangaroo Island with a local guide and group of curious travellers, taking in the best natural and cultural highlights across the island. Hang out with a true blue sheep farmer, surf down sand dunes and discover the natural landmarks of Flinders Chase National Park. Throw in some of Australia’s best beaches and you’re in for an ace adventure. 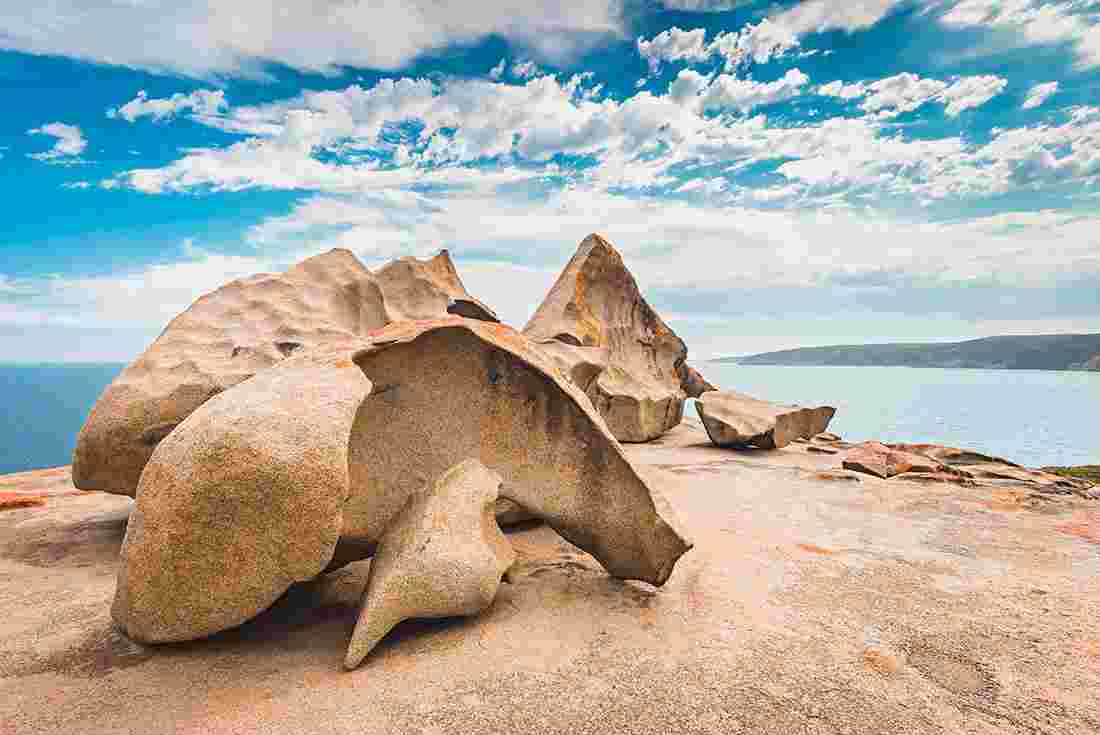 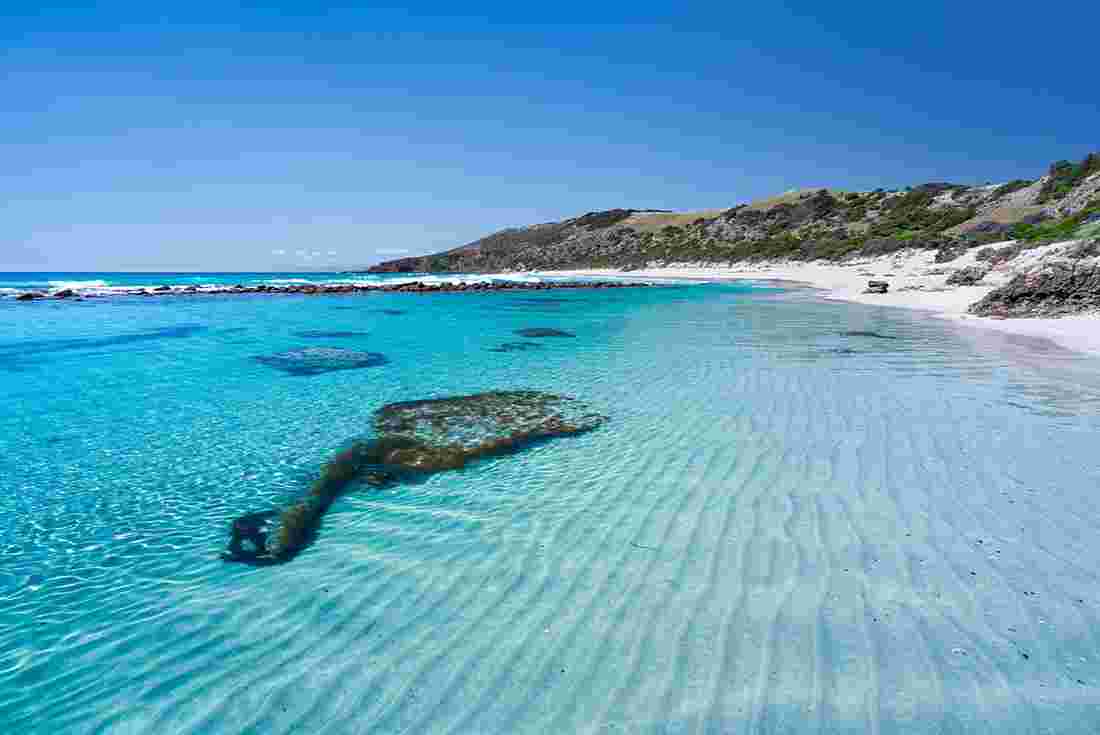 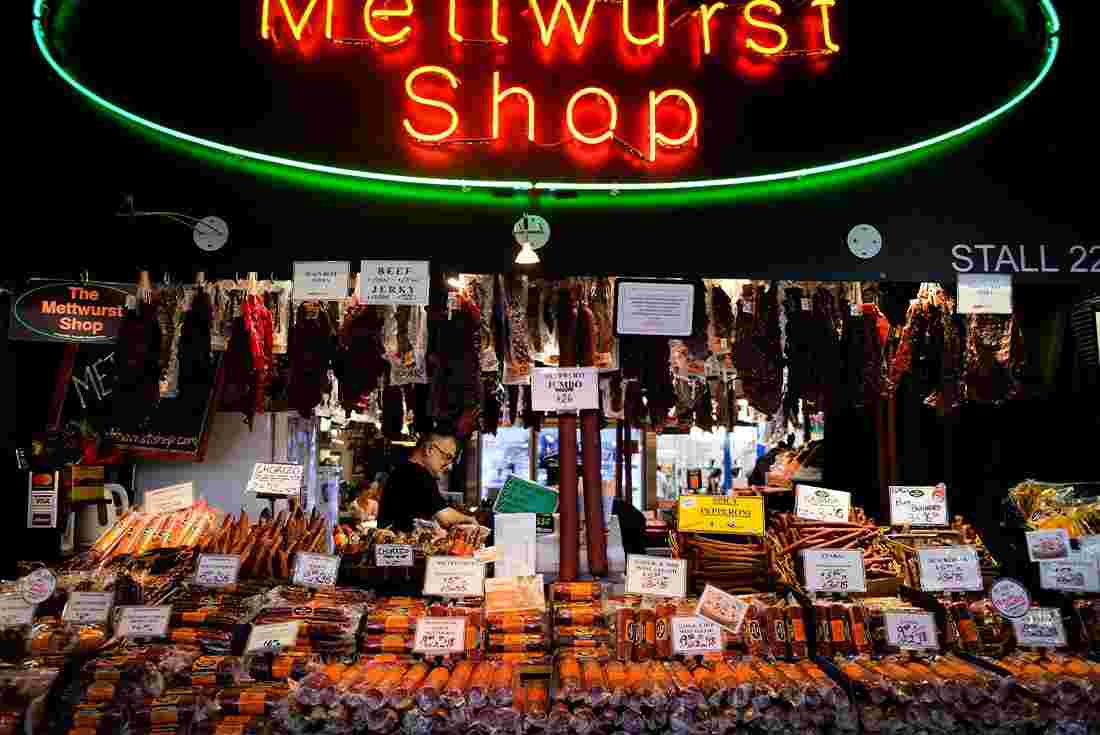 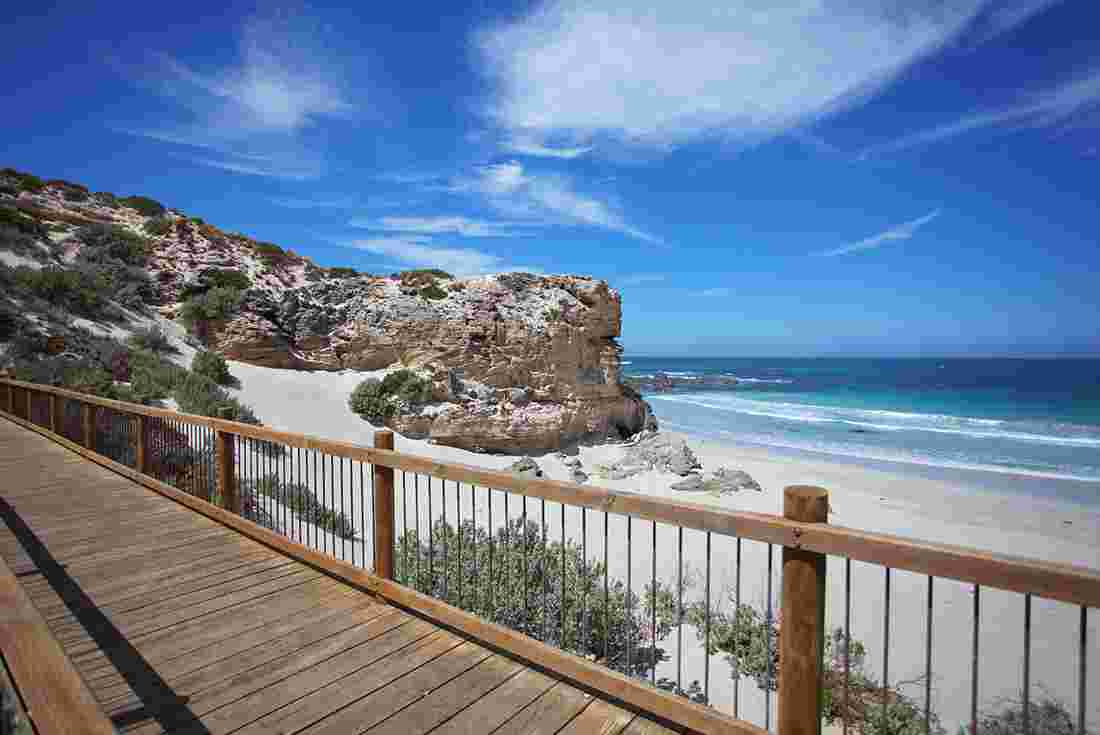 Welcome to Adelaide, capital of South Australia and your gateway to the delights of Kangaroo Island. Your adventure begins at the Tandanya National Aboriginal Cultural Institute, a museum dedicated to Aboriginal and Torres Strait Islander culture and art. A welcome meeting will take place here at 12pm where you’ll link up with your local leader and the other travellers joining you on this adventure. Find out what’s in store over the coming days then take some time to explore the gallery. Then, join your leader for a walk to Victoria Square, also known as Tarntanyangga, and learn about this significant spot where the Aboriginal flag was first flown in Australia. Take a wander around the fresh produce stalls of the Adelaide Central Market, then it’s time to leave Adelaide behind. Board a bus bound for Cape Jervis (approximately 2 hours), from where you’ll jump aboard a ferry and travel to Penneshaw on Kangaroo Island (approximately 45 minutes). Be sure to keep an eye out for dolphins swimming alongside the ferry! Get settled into your hotel, then perhaps get to know your group over dinner on the island.

Today's meeting will take place at 12pm in the lobby of the Tandanya National Aboriginal Cultural Institute. Please look out for your leader who will be holding a sign with the Intrepid logo. Make sure you are on time for this important meeting, as the group will leave Adelaide on the 3:30pm bus towards Kangaroo Island. If you can't find a flight that arrives on time we recommend you book an additional night in Adelaide prior to the start of the trip.

Australia’s third-largest island, Kangaroo Island is a veritable paradise for wildlife lovers. It’s not just Kangaroos you can find here – wallabies, sea lions, echidnas and koalas are all locals too. Evidence suggests Aboriginal life existed on the island as far back as 16,000 years, but it was uninhabited by the time Europeans arrived in in the early 19th century. The island is now home to 4000 people, and today will be spent diving into local culture and history. First up, head to American River (not actually a river, or American, but a little town on the northeast coast of the island), where you’ll find a schooner boat first built in 1803 called “Independence”. Learn about the boat’s history and see how it’s being rebuilt, then pop over to an oyster farm to see how this tasty and sustainable seafood is cultivated. Next up, take a scenic walk through coastal scrub towards the remains of an old fish cannery built at the end of the 19th century, keeping an eye out for the rare and striking Glossy-Black Cockatoos along the way. Head out onto Dudley Peninsula and get a real taste of Aussie culture when you pay a visit to a sheep farm to see how sheep are shorn and meet the owner’s super sweet Kelpie dogs. Stop by the Cape Willoughby Lighthouse, the oldest lighthouse in South Australia. If you’re feeling extra adventurous today, you’ll have the chance to climb the 500 steps to the top of Prospect Hill, the highest point on Kangaroo Island. Finally, head to Kingscote, the largest town on the island, check into your hotel and put your feet up.

After breakfast, swing by Salt Lagoon to snap some pictures of this scenic spot, then continue towards Emu Bay beach. If the group fancies, you’ll have the chance to pop into the Emu Bay Lavender Farm to try some curiously delicious lavender scones. Spend some time stretched out on the white sand or paddling in the pristine, clear waters, then beach hop over to the secluded Stokes Bay, a gorgeous spot for a swim. Early 2020 saw bushfires ravage Kangaroo Island, with the Stokes Bay region being particularly badly hit. The Stokes Bay Community Hall served as a centrepiece for the settlement since 1952, but was completely destroyed by the fires. Today the area is in recovery, and the National Trust is working with the local community to restore the hall, as well as natural habitats for wildlife. After an afternoon on the beach, return to Kingscote and enjoy an evening at leisure.

Start the day with a visit to Seal Bay. There are no seals here, but there are plenty of sea lions! The sea lion colony you see today has existed at Seal Bay for thousands of years, and your leader will fill you in on the lives of these endearing creatures as you watch them swim, play and bask in the sun. Continue on to Little Sahara, named for its rippling sand dunes that resemble the North African desert. While here you may have the chance to hire a sandboard and ride your way down the dunes. Next up is something really special – head to Vivonne Bay, which is not only one of the most stunning beaches on Kangaroo Island, but the whole of Australia. Venture into the Flinders Chase National Park and come face to face with the aptly named Remarkable Rocks, made up of naturally sculpted granite boulders. You’ll also check out the impressive Admirals Arch and take some time to explore the park before heading back to Kingscote.

Get ready to say goodbye to Kangaroo Island as you make the drive back to Penneshaw and catch the ferry back to the mainland. Dock in Cape Jervis and hop on the bus back to Adelaide (approximately 2 hours). You can expect to arrive back into Adelaide at around 11.30am, at which point your adventure will come to an end.

Your adventure comes to an end at Adelaide coach terminal upon arrival at approximately 11:30am. Please consider this when booking onward travel.
Want to tailor this itinerary?

There are currently no scheduled departures on our Kangaroo Island Adventure trip. If you are interested in other trips in the region visit one of the links below.

You have the flexibility to change your travel plans up to 28 days before your scheduled departure, and you can pick new travel dates or an entirely different trip, with no change fees. Some exclusions may apply. Learn more

SINGLE SUPPLEMENT
A single supplement is available to be booked on this trip, subject to availability. Please speak to your booking agent for more details.