Home » I visited Romania for the vampires; but discovered so many other reasons to go
FeaturesGuides

I visited Romania for the vampires; but discovered so many other reasons to go

OK, I’ll admit it. I picked Romania because of the vampires.

Like many people, when I think about this Eastern European country I mostly imagine the region of Transylvania — fictional home of Count Dracula, the most famous vampire of all time.

As a serious fan of horror books and movies, vampires in general have always been my favourite monsters. But I also study the myths around them, and even wrote my own book about it. I’m also pretty into all things Gothic – castles, churches, cemeteries, and the like. So when I decided to finally set foot on Transylvanian soil after reading about it for so long, it was with that stereotypical spooky stuff in mind.

Funny thing happened though. After spending a week there with a group on Intrepid’s Budapest to Bucharest trip, I realized the most shocking thing about Romania has nothing to do with monsters. It’s how few travellers have yet to discover all the fascinating history, heritage and charm this lesser-known (and inexpensive!) Eastern European country has to offer.

So here are some of the many surprises I encountered on my first trip to Romania — that have nothing to do with vampires. (OK, and maybe one at the end that does.)

Yellows and blues and reds, oh my

Honestly, I came expecting grey Eastern Bloc architecture and dark shadowy forests. But no sooner had our group entered Romania, we encountered the brightly coloured houses of rural Maramures. Traditional folk motifs from embroidered textiles are reproduced here with tiles, sometimes wrapping entire houses in golden yellow and deep reds. Nearby, we visited the so-called Merry Cemetery, all of its graves painted in bright azure blue, with cheery, comic-book style portraits of the deceased.

The cities too, were a kaleidoscope of colour: from our viewpoint in a 15th century watchtower in Brasov, we looked out over a city blanketed in red roof tiles, later wandering amongst the pastel-hued storefronts of its town square. In the capital of Bucharest, from raw political street art to elaborate religious frescos, unexpected colour explosions await. 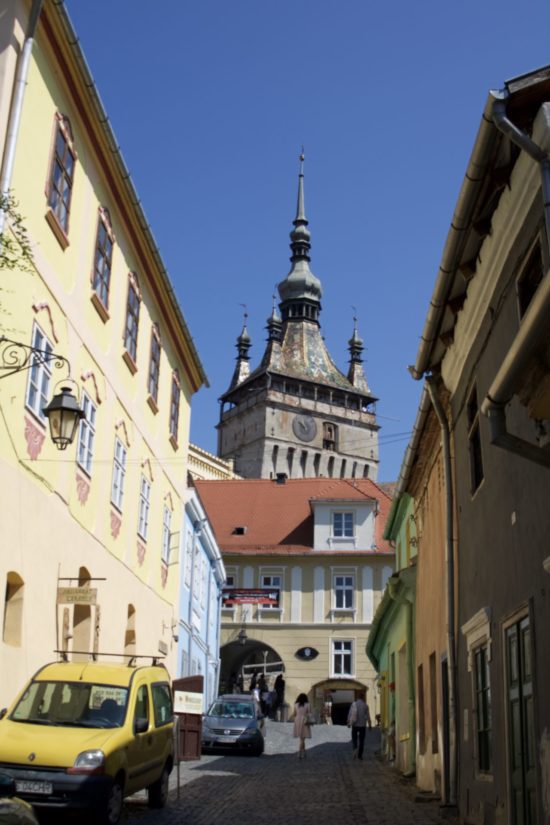 I’m definitely adding Romania to my list of Prettiest Countries of Europe.

The revolution was televised, but you can’t beat a first-hand account

Eastern European history is complicated, and Romania is no exception. Second to Vlad “the Impaler” Tepes, the bloodthirsty 15th century prince that partly inspired Dracula, the historical figure I associated most with this country was Nicolae Ceaușescu, the former President ousted and executed in the Revolution of 1989.

If you’re thinking that 1989 wasn’t that long ago, you’re right. The spectre of Ceausescu’s communist dictatorship looms still over present-day Romania. There’s no way to sugar-coat it: there are dark tales in the recent history of this country.

Truly, more than anything — the guided walking tours of medieval villages, the insider tips, the arranging of trains, and trams and horse-drawn carts — what made the Intrepid group tour experience so valuable was the local guides that joined us along the way, who shared their very personal stories. 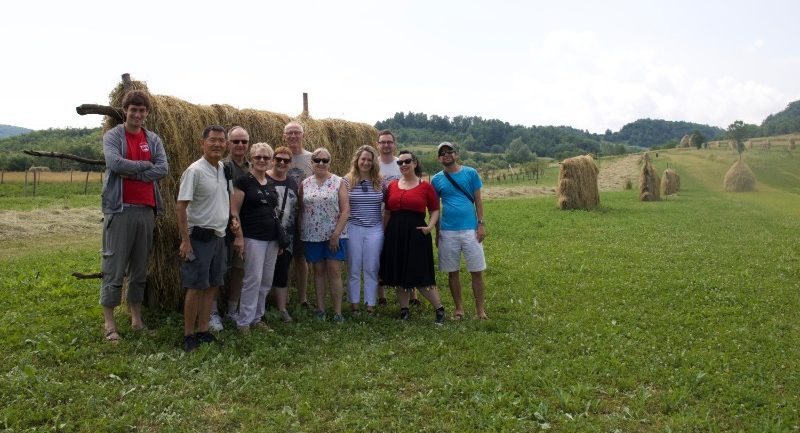 My amazing Intrepid group in Maramures

To visit the Memorial to the Victims of Communism (housed in a former prison) then to sit with a local as he reveals how his own family was visited by secret police. To hear a woman who has cooked your dinner recall stealing bread as a child during food rationing. Or have the bullet holes in a wall pointed out by someone who was there that day, at that protest. These are things that stick with you, especially as you tour the ostentatious Palace of the President, Bucharest’s most surreal experience.

VISIT ROMANIA ON A SMALL GROUP TOUR WITH INTREPID TRAVEL

Save your fork, there’s donuts

Before this trip, I couldn’t name a single Romanian dish. Maybe because the country’s cuisine is a melting pot of the cultures that have made up its citizenry through the centuries, including Hungarian, German, and of course, Roman. Or maybe because so much of our contemporary food culture is focused on the small plate tasting menu, and that is most definitely not what you’ll find here. 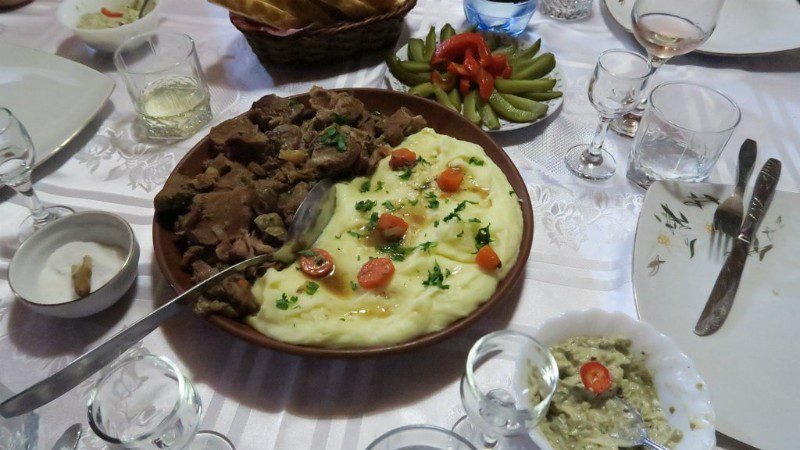 Romanian food is hearty. In our village homestays, we were fed like we’d been working the fields all day: dense home-baked breads, soups laden with noodles or dumplings, cabbage rolls, sweet cakes. In many cases this was true farm-to-table, with ingredients grown on site.

As a vegetarian I was pleasantly surprised to find polenta a staple, either with cream of mushroom or baked with cheese. I discovered my favourite “salad” is pureed eggplant. And what the menu lacks in green vegetables it makes up for in the most flavourful tomatoes I’ve ever tasted. I’m not sure what our tour leader Mike was thinking waiting until the last night to show us the Papanasi, a wallop of a donut packed with soft cheese and plum jam, because I could have eaten that every day.

READ MORE: WHAT IT’S REALLY LIKE EXPERIENCING A HOMESTAY IN ROMANIA

For the brave, no meal was complete without Pálinka, the local fruit brandy. Nothing was that expensive and one meal often felt like a day’s worth of food. In short: bring your appetite. 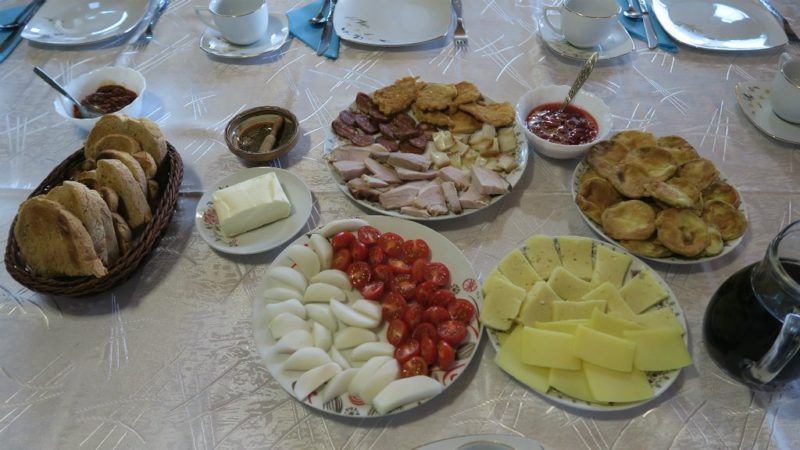 Appetizers at our homestay

In search of Dracula

If you’re into vampires, you probably want to visit the famous Bran Castle (erroneously referred to in a bit of marketing genius as “Dracula’s Castle”) as a day trip from Brasov or Bucharest. But if you’re really, really, into vampires, you’ll find even more to sink your teeth into in Sighisoara.

This medieval Transylvanian town is a postcard-perfect Unesco Heritage site, a walled community with a stunning 14th century clock tower, gorgeous church, and…. quite a few silly vampire souvenirs.

Blame Vlad the Impaler. He was born here, and since becoming a pop culture figure as “the real life Dracula,” is now part of Sighisoara’s identity. I’m grateful our itinerary allowed us ample time here, to wander the cobblestone streets, relax in cafes, and yes, indulge my vampire tourist. 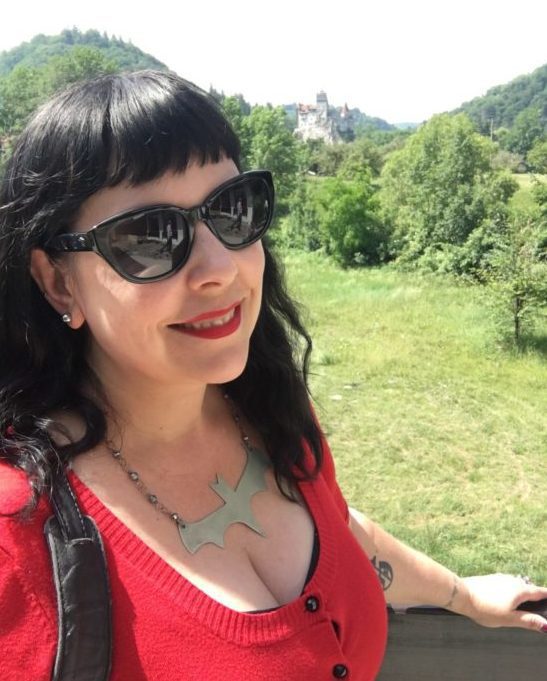 Even for me, it’s pretty cheesy to pay $1 to enter “Dracula’s birthplace” — the room Vlad was born in, now done up haunted house-style. But hey, when in Transylvania!

Ready to let Romania blow your mind? Check out Intrepid’s range of small group tours there. 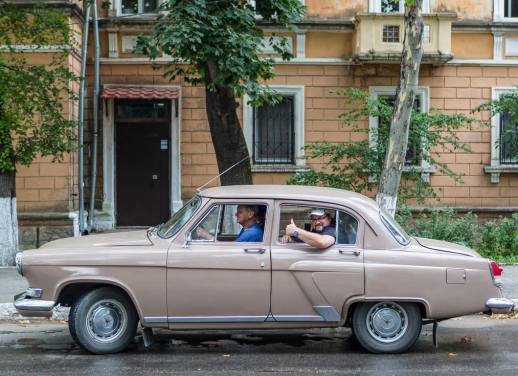 Liisa Ladouceur is a writer from Toronto, Canada, who is trying to visit at least one new country each year. While travelling, she can usually be found climbing things, photographing cemeteries, talking to animals, practicing her French/Spanish/Arabic, searching for a new favourite work of art, or staring at the sea. Follow her on Twitter @liisaladouceur.

I’m intrigued to visit Romania after reading your post, especially after learning that it’s inexpensive! Good to know that Romanians feed you well, too. 🙂

You’re making me Hungary for Romania.