Home » Travelling to India for the first time? Here’s where you should go
FeaturesGuides

Travelling to India for the first time? Here’s where you should go At the risk of stating the all-too-obvious, India is a giant, giant country. But it’s not just big in terms of size; it also has a huge amount of cultural and ecological diversity.

For one thing, there are more than 22 different languages in India, with over 720 dialects, so the vibe is totally different, depending on where you go. Same goes for the landscapes themselves: there are jam-packed cities, chilled-out beaches, mystical mountains, vast deserts, and so much more.

All of this means that, among other things, it’s really important to go into your trip with at least a vague idea of what you want to see and do while you’re there, so you can plan your time accordingly. Here are some good options to get you started:

If you want mountain life 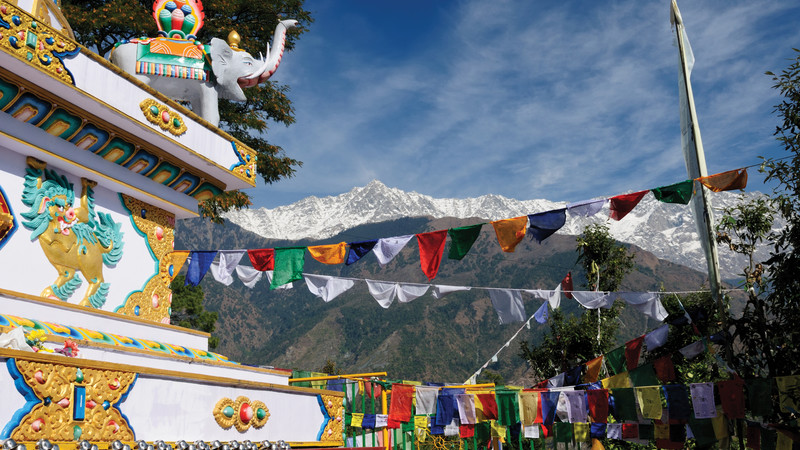 Picture yourself waking up, taking a nice long stretch and a deep breath of fresh, pine-scented air, and savouring the morning over a cup of steaming chai. This is the epitome of the a.m. scene in the Himalayas, so if you just got hit with a hard pang of wanderlust, you’ve probably found your spot.

When it comes to the Himalayas, you’ve got two main locations: the India side and the Nepal side. Chances are, if you’re mentally conjuring up visions of prayer flags and snowy mountain backgrounds, you’re thinking of the Nepal side. But the Indian Himalayas, which includes classic mountain towns like Shimla and Dharamsala (where the Dalai Lama lives), are equally magical. A word of caution, though – the journey to the Himalayas involves lots of train rides. Cool if you’re a trained person, of course, but if the thought of chugging along on at-times super steep rails makes you a bit queasy inside, you may want to reconsider. 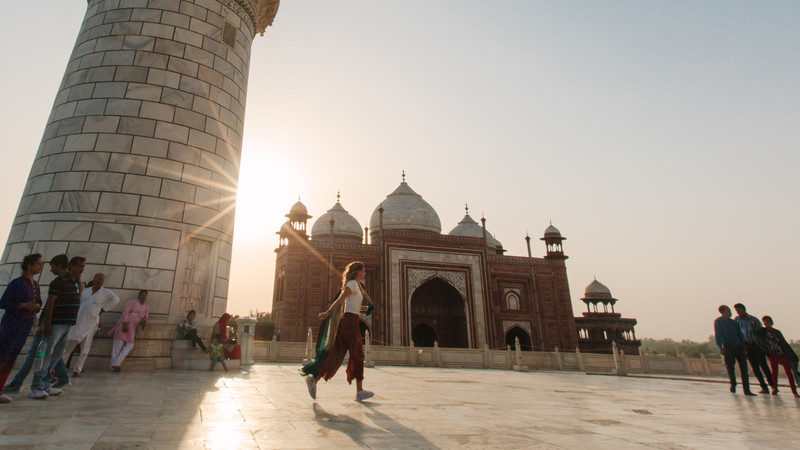 The Golden Triangle has your name written all over it. No, it’s not an actual triangle – it’s just a nickname for the triangle-shaped route that goes from New Delhi (the capital of India) to Agra (where the Taj Mahal is) to Jaipur (known as the “Pink City,” for its trademark building colour).

RELATED: HOW TO SOUND LIKE A LOCAL IN INDIA

If you do the Golden Triangle while you’re in India – which, let it be known, is a very popular choice for travellers – you’ll see all sorts of bucket list-y sites. Most travellers complete the triangle in about a week or so, give or take. In Delhi, you’ll see Humayun’s Tomb, the Red Fort, Old Delhi, and so much more. Agra’s all about the Taj Mahal, which, as one of the Seven Wonders of the World, needs no explanation. And Jaipur, which is the capital of the state of Rajasthan, is known for its uniformly pink buildings and the City Palace, part of which is a royal residence.

If you want solid beach vibes 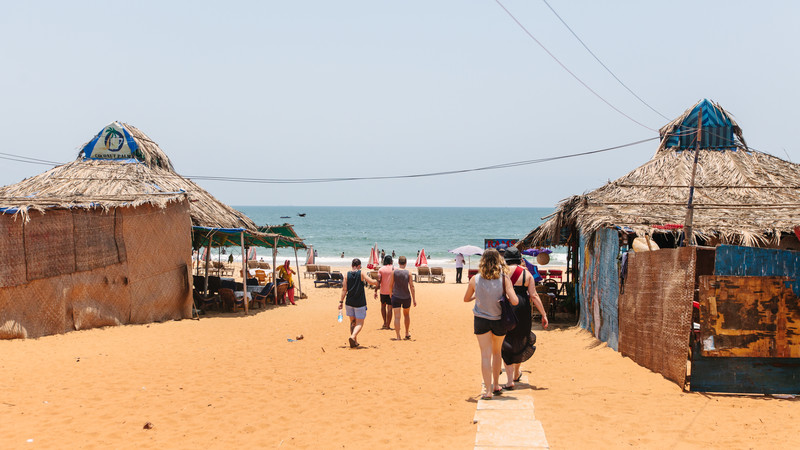 Get yourself down to South India ASAP! While most people don’t exactly hear India and think “salt air life,” the truth is that there are lots of beautiful beaches in the southern areas of the country – but each area has a decidedly different feel.

Kerala is often cited as India’s version of Bali. Filled with rice paddies and beautiful backwaters, the state is known for both its tropical, jungle-y aura and its devotion to the eco-tourism lifestyle. Be sure to check out Varkala Beach while you’re there, as it’s often cited as one of the top beaches in Asia. Goa, on the other hand, is definitely more of a beach party scene. Though it does attract its fair share of nomadic yogis, the state is also known for its nightclubs, and most of the beach bars blast trance and techno music during the day. Goa is also a great place to rent scooters and zoom around through the colourful streets all day.

SOAK UP THE SOUTHERN INDIA SUN ON THIS 16-DAY TRIP

If you want all of the colourful sparkles Rajasthan is probably the destination of your dreams. India’s largest state by area, Rajasthan – which is northeast of New Delhi, below Pakistan – is known for its princely forts and sparkly palaces. Not surprisingly, the state – which, translated, means “Place of Kings” – is also often one of the first places that people go when they go to India.

To get the ultimate Rajasthan experience, check out any or all of its best-known cities, from Jaipur to Udaipur to Jodhpur to Jaisalmer. Though all of them are known for different things – Jaisalmer is most famous for its havelis (mansions from the Mughal era) and the Thar Desert; Udaipur is all about its stunning lakes – they all have historic forts and heritage sites that are definitely worth visiting. But perhaps more than anything else, Rajasthan simply oozes colourful vibes, from royal blues to amber pinks and everything in between. As a result, you will not only leave with a deep sense of the region’s moneyed past – but also with some serious Instagram gold.

TRAVEL BY TRAIN, RICKSHAW AND CAMEL AROUND CLASSIC RAJASTHAN

If you want a yoga scene 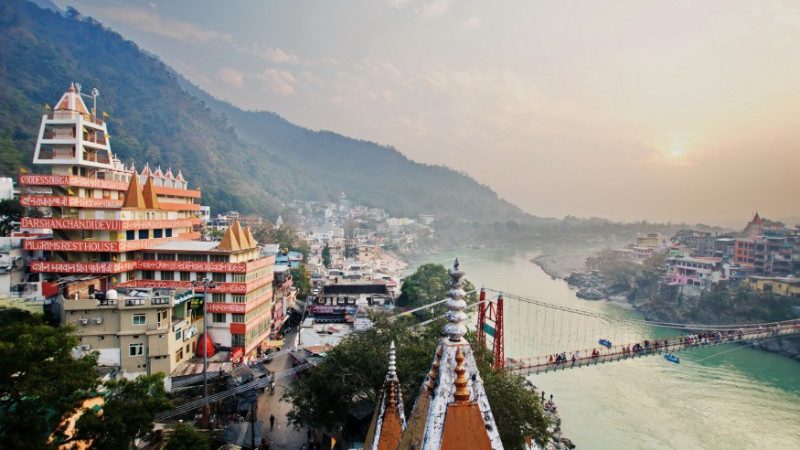 As the birthplace of yoga, India certainly doesn’t fall short in the yoga department. The only question is: Where should you go for the ultimate yoga experience? The most obvious choice is Rishikesh, as it’s known as the yoga capital of the world. Located in the Himalayas, Rishikesh is next to the Ganges River, which, in Hinduism, is considered sacred and pure. Not surprisingly, then, the city is absolutely teeming with gurus, yoga schools, ashrams, and more.

VISIT RISHIKESH ON OUR 19-DAY BEST OF INDIA TOUR

Aside from Rishikesh, another yoga hot spot is Varanasi, which is also near the Ganges River and considered to be the holiest city in the Hindu faith. Both travellers and locals alike make the pilgrimage to Varanasi as part of a quest for spiritual enlightenment, and as a result, there are tons of yoga schools and spiritual centres all throughout the area.

And finally, South India is also great for yogis on a journey. Consider Mysore, which is often considered to be the birthplace of more modern, 20th-century yoga. Known as the capital of Ashtanga yoga – which is the kind where you repeat the same poses over and over – Mysore was also home to Pattabhi Jois and BKS Iyengar, both of whom helped bring yoga over to the Western world. Kerala is another great choice too. It’s considered to be the birthplace of Ayurveda, yoga’s sister science that’s based on the idea of balance in the mind, body, and soul. And Goa has many yoga schools and retreats, too, though, as a reminder, it’s also got that party scene to contend with, so it may not deliver the full yogic experience.

If you want delicious eats 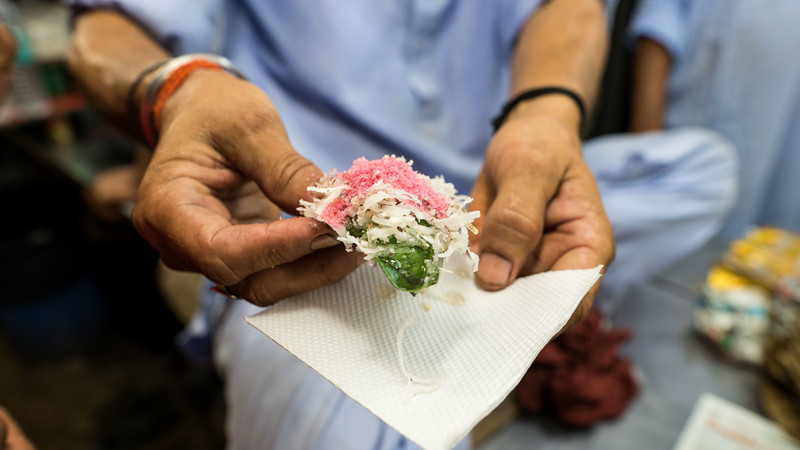 This one’s a toughie, because there are so many different kinds of cuisines in India, and they are all. so. good. That said, if you are a full-on foodie, you may want to choose your destination based on the kind of regional food that you want to try the most. As an FYI, most Indian restaurants around the world serve staple Punjabi dishes, like naan and chicken tikka. But Indian cuisine goes way past naan. Here’s a brief breakdown of some popular foods by region: 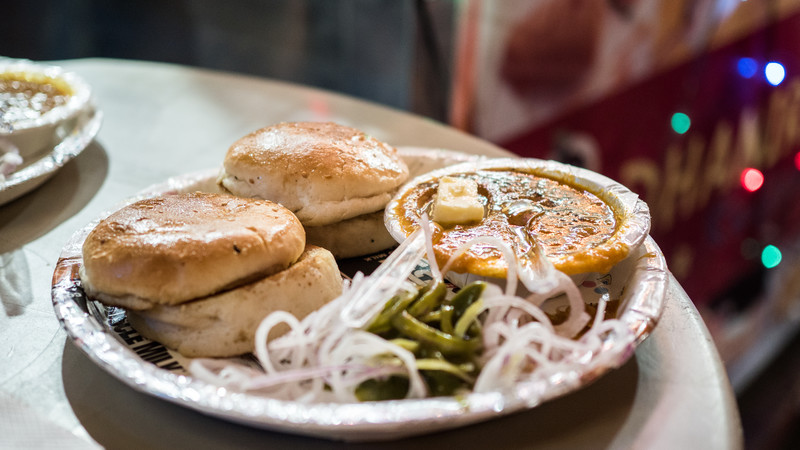 Unlike other regions of India, most Northern Indian dishes don’t have much rice, and are actually relatively mild in terms of spice levels. Some examples: naan; roti; seekh kebab (skewers of minced meat); chana masala (curry with chickpeas); rajma (kidney beans with spices); daal (lentils); chole bhature (fried bread with chickpeas); and all sorts of chaats (fried street foods, which are most famous in Delhi).

RELATED: 5 REASONS WHY INDIA IS A GREAT DESTINATION FOR VEGANS 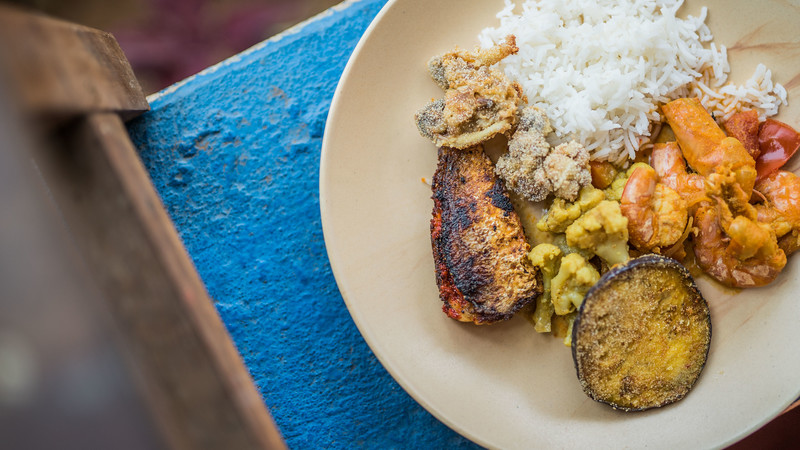 Most of the food in this region is primarily rice based. Some examples: idlis (steamed cakes that are made of rice batter); dosas (pancakes made from rice or even lentil flour); masala dosas (arguably the most popular dosa, this one has potatoes and masala seasoning); rasam (spicy and sour soup); olan (coconut milk-based dish with peas and spices); papadum (deep-fried dough served as a side dish); seafood dishes. 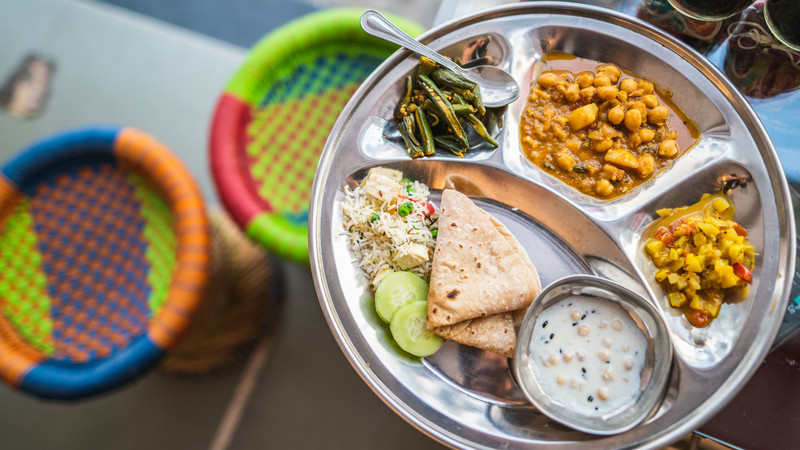 Most of the food in West India is primarily vegetarian, and is also sweeter than some of the other regional dishes. Some examples: barfi (sweet dessert made from condensed milk); pooran poli (sweet stuffed bread); Shiro (sweet roasted flour with milk, butter, and sugar); jeera aloo (potatoes, cumin, and spices); daal dhokli (wheat flour dumplings).

EAT ALL THE THINGS ON OUR 15-DAY REAL FOOD ADVENTURE 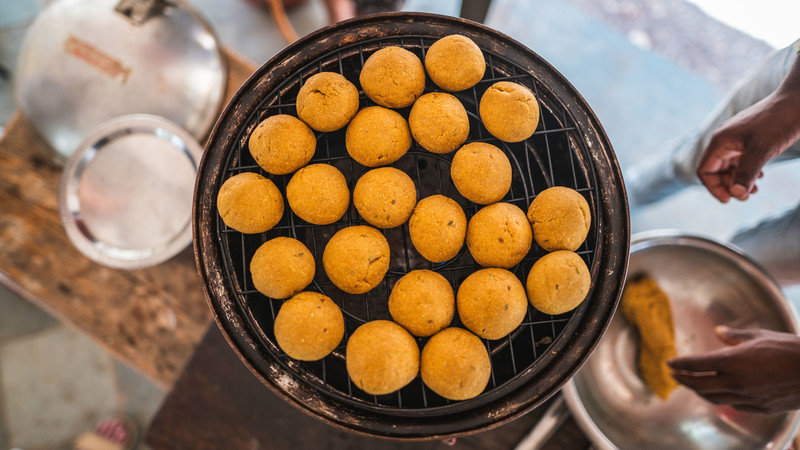 Many of the dishes in this region are influenced by Tibet, Nepal and Bangladesh, due to their geographical proximity. Some examples: red rice; momos (dumplings, originally from Tibet, that are all over India but especially good here); luchi (puffed bread fried in oil); chingri malai curry (shrimp curry with coconut); koldil chicken (chicken cooked with banana flower).

So there you have it: India in a nutshell. Indecision may or may not be your problem now, right? The truth is that, since India is so big, and full of so many different amazing trip options, there is no way you will be able to see or do it all in one trip. But that’s okay – it just means that you’ll certainly be coming back for more.

There is SO much to see, do and experience in India, and now you might be a little bit closer to knowing where to start. Check out our full range of small group adventures through India now. 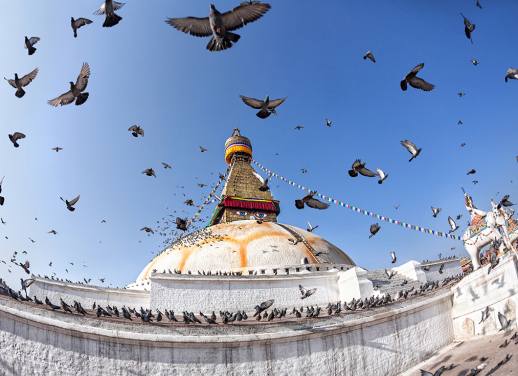 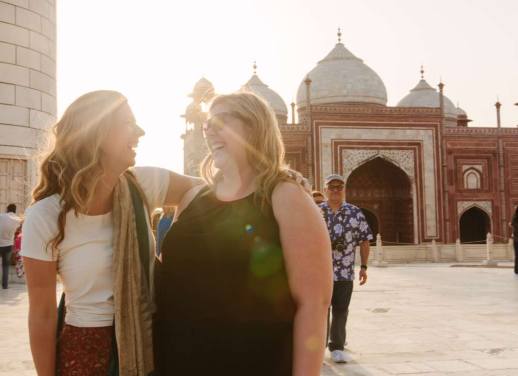 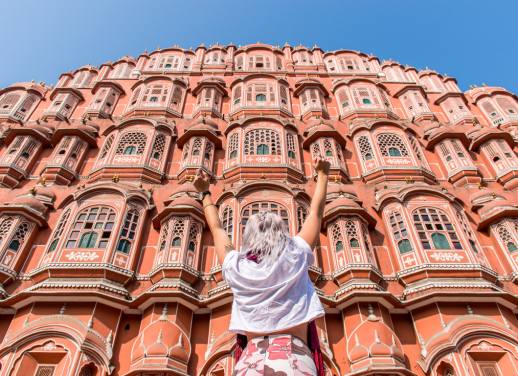