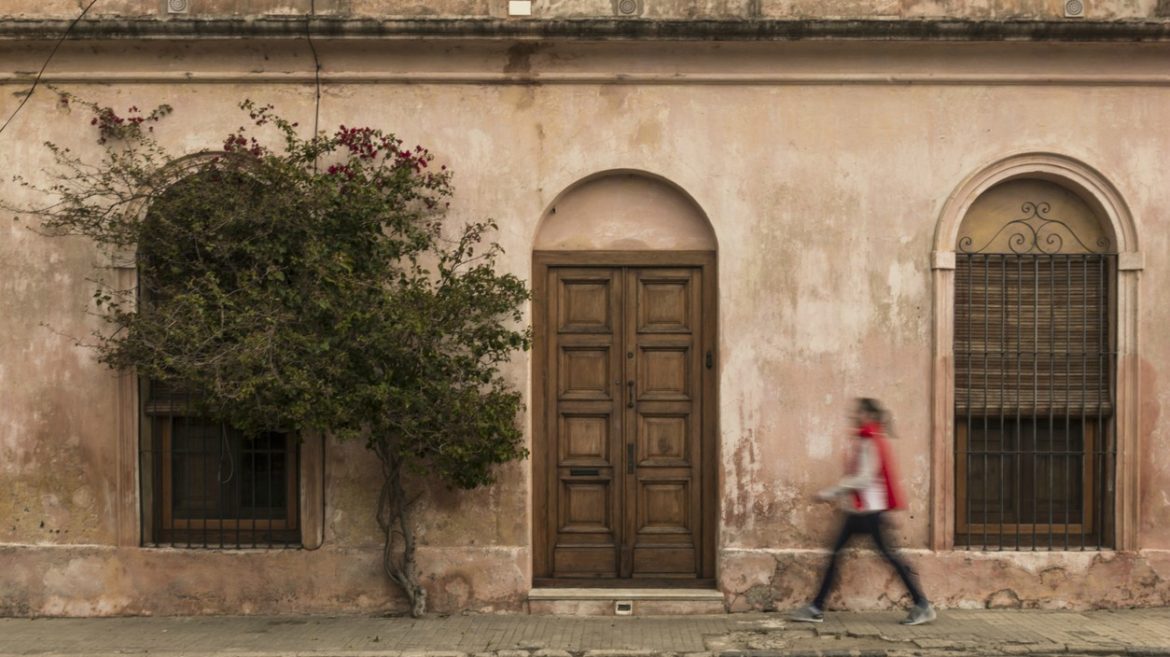 Colonia del Sacramento (Colonia, for short) is a city most expats from Buenos Aires are intimately familiar with.

A short ferry ride from Agentina’s capital city, Colonia is Uruguay’s port of entry for most, and often used as a quick day trip to renew visas. But for those who are keen to experience a quaint and charming town with distinctively European vibes and a rich arts and culture scene, Colonia offers that and so much more.

In my humble opinion, it’s one of South America’s most underrated foodie hotspots. It’s also gorgeous. 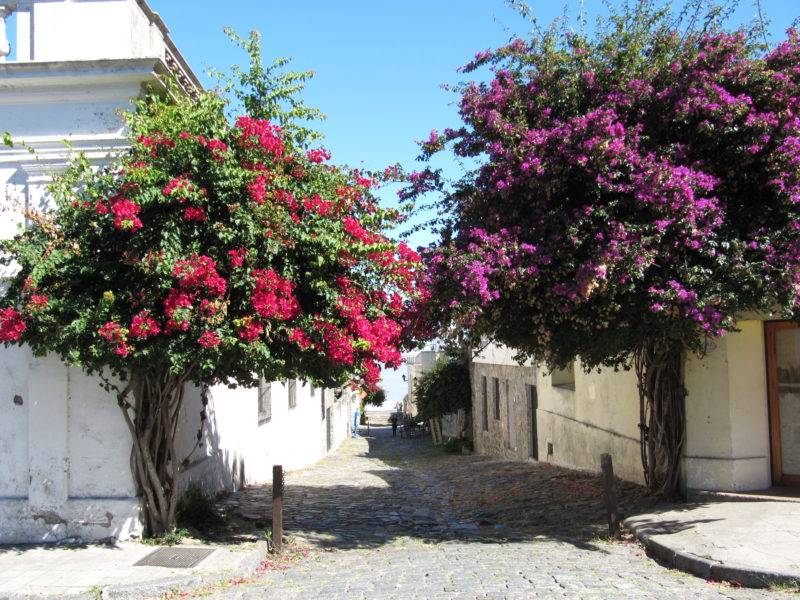 Here’s why you should add this Uruguayan city to your to-visit and to-eat list:

Let me start by saying I have a massive sweet tooth, but found a lot of the deserts in South America as a whole overly sweet. Don’t get me wrong, an alfajore (dulce de leche sandwiched between cookies and coated in chocolate) can really hit the spot, but it’s sometimes that bit too much. But after seven months of travelling, my afternoon slice of cake upon arrival in Colonia rivaled the cakes my mom used to make for my birthday. Moist, chocolatey and decadent, it was perfection.

It was also everywhere, so if you’re not one to avoid temptation, take this as your warning. Cafes, restaurants and bakeries alike have them lined up in the window in drool-worthy displays, ranging from delicate Italian sponge cakes to German-style chocolate cakes layered with cherries and whipped cream. 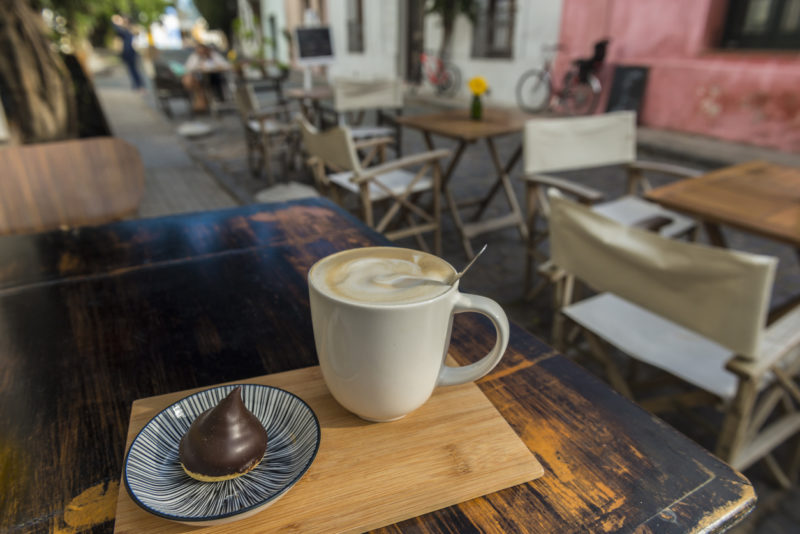 I’m aware that most foodies in this part of the world are there for the parrilla (bbq), and in Colonia I had one of the best parrillas I’ve ever experienced… in my friend’s backyard. Parrillas, or asados, are such an integral part of the culture in Uruguay that I’m hard pressed to believe there’s such a thing as a bad meal. Most families have built grills in their yards, and they come together family-style to grill, eat, talk and drink into the wee hours of the morning.

One of the top beef-producing countries in the world, in Uruguay’s gaucho (cowboy) culture, cattle outnumbers the human population 4 to 1. It’s no wonder those were some of the best steaks I’ve ever eaten, slowly grilled over hot coals. Along with traditional cuts of beef, you can also venture towards the adventurous, trying rinones (kidneys), morcilla (blood sausage), corazon (heart) and more. From beef to pork and chicken, the options are endless, though beef is the most typical Uruguayan choice.

And don’t worry… a parrilla isn’t limited to protein choices. Grilled potatoes, onions and sweet peppers are often served alongside the meats, with fresh bread and frites (fries).

Now, let’s talk wine. Uruguay is definitely not the most well-known wine producing region in the world, but that just means you’re going to be pleasantly surprised, because the wine here is spectacular.

The fourth largest producer of wine in South America, Uruguay’s red wines, in particular their Tannats, are smooth, full bodied and really reasonably priced. The Tannat grape was originally introduced by Basque immigrants, and some now argue that Uruguayan Tannats are even better than their French counterparts.

For those looking for a more mainstream grape, the region also produces delightful Cabernet Sauvignons, Merlots, Cabernet Francs, Tempranillos, Sauvignon Blancs and Viogniers. A wine for every palate! 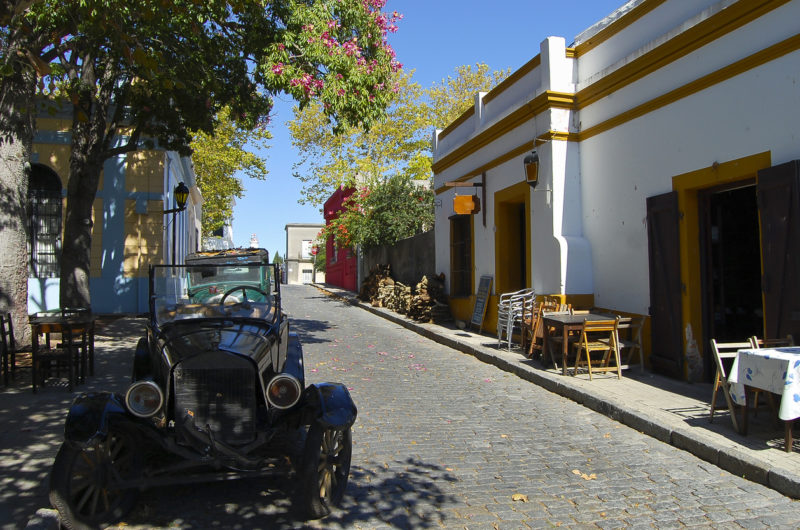 Al fresco dining is the norm in Colonia

In a town packed with an incredible number of restaurants (and every one I ate at was delicious), El Buen Suspiro was a definite highlight, driven by a defining love of wine and cheese. With a cute little outdoor terrace, incredibly friendly and knowledgeable staff, and a great selection of picadas (small plates like tapas), cheeses and charcuterie, I was sold. They make their own wines, cheeses and accoutrements, some of which found their way into my bag to be added to my breakfast routine.

For a true Uruguayan parrilla, El Porton came highly recommended and didn’t disappoint. When I’m travelling I always choose personal recommendations over guidebooks, and this place boasted both. The meat was obviously the highlight, but they also had a great selection of salads and sides, and really nice wine. A bit of a stroll from the historic city centre, it was worth the walk, packed with locals, and despite the fact that we had to wait about 15 minutes for a table, it was one of the best steaks I had in Uruguay.

READ MORE: A GUIDE TO THE MUST-SEE SCENIC SPOTS IN URUGUAY 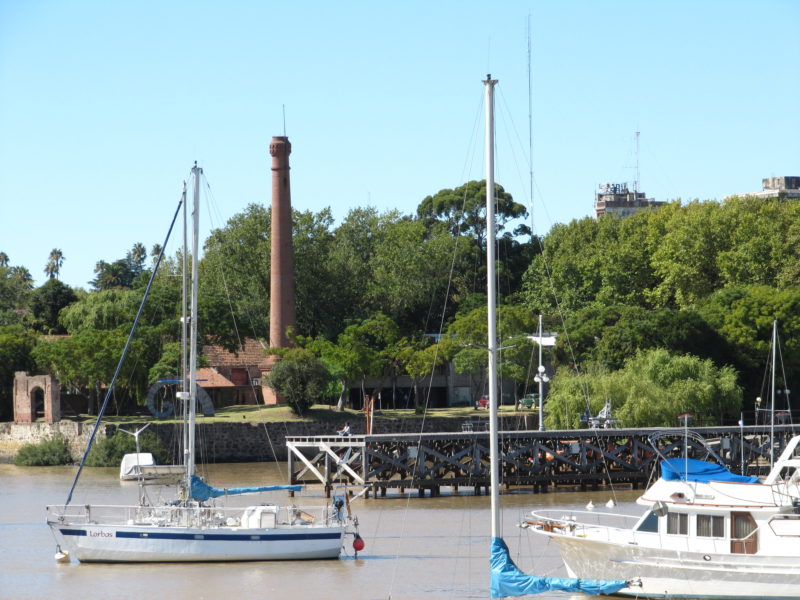 Other iconic Uruguayan dishes not to be missed while in Colonia: a chivito, which is a beef and fried egg sandwich loaded with vegetables and sauces, sold at food stands and restaurants. As with most places, follow the locals – La Eslabon, near the ferry terminal, was delicious.

For a lighter meal try El Drugstore Café, a colourful and friendly restaurant with an open kitchen, and a great place to stop for an afternoon Yerba Maté (tea).

Other dishes to add to the list are homemade paella with fresh seafood; empanadas, a pastry turnover stuffed with meat, vegetables, cheese, hardboiled eggs or some delightful combination; and choripán, a chorizo sausage grilled and served with chimichurri sauce in a crusty roll like a miniature baguette.

There’s also a ton of European (primarily German and Italian) influence in Colonia, so if you need a break from the heavy asados there’s a wealth of Italian-style restaurants serving up gnocchi, pizza and pasta.

So, let’s sum up this fantastic place. Colonia del Sacramento is one of the oldest towns in the country and is a UNESCO World Heritage Site. 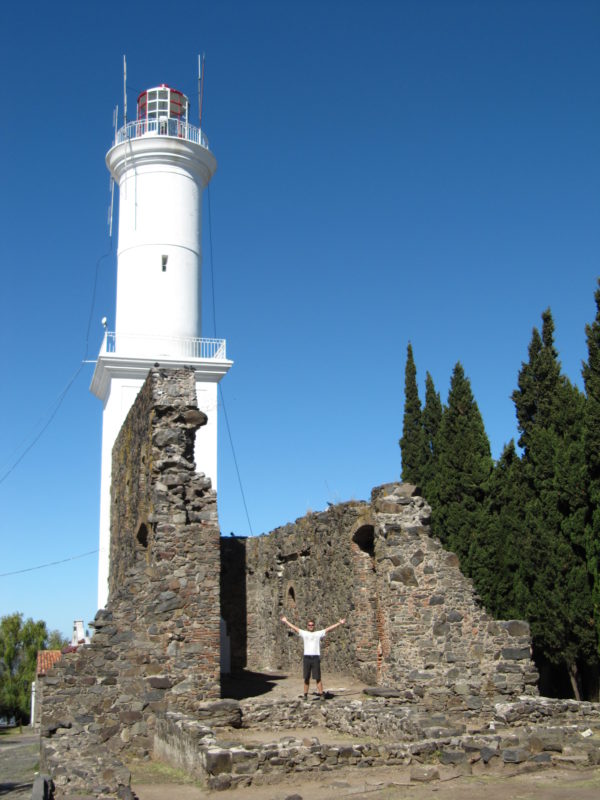 It’s the perfect place to spend a day or two wandering, exploring the cobblestone streets, climbing up the lighthouse, shopping in quaint boutiques, and checking out the old city gate with its wooden drawbridge. Thanks to its burgeoning arts scene there’s always something going on, from live jazz to a gallery opening, and the Municipal Museum gives a great snapshot of the area’s tumultuous history.

Picturesque and cozy, there’s no end of winding streets and waterfront trails to wander as you work up an appetite for your next Uruguayan meal.

Want to visit this delicious and gorgeous city for yourself? Check out Intrepid’s range of small group adventures in Uruguay.

Elise is an adventurous soul based in Vancouver, Canada (for now) who lives to experience new places, cultures and cuisines around the world. A Marketing Strategist and Freelance Writer, when not working or planning her next trip she can be found curled up with a good book and a mug of tea, on the water, or on the trails. Follow her adventures on Instagram @lisey_d_.

I did a daytrip from BA,enclosed ferry,wish I cudda got on deck. Long lines in the terminals,but worth the wait.
Sacramento is small & was kinda dead the day I was there but a steak at a local outdoor restaurant was the best
I had & muy barato compared to BA places. The little tourist office spoke English as did most people I met.