If you’re short on time, hitting the big cities can give you a taste of South America without the long travel times between each bite. Being in a city is like ordering a big platter of culture, with every tasty morsel at your fingertip (sorry, we can’t help but think of food when it comes to South America). Having said that, if you’re going on a mammoth multi-country trip then the cities are a great place to step off the tourist trail and catch your breath. Stock up on the essentials, enjoy some company and feast on a meal fit for a king (although if you’ve been off the grid for a while, might we suggest a shower first?).

Linger over a breakfast of medialunas (little croissants) and espresso at a café in San Telmo, people-watching as the locals criss-cross Plaza Dorrego. Make your way into downtown Buenos Aires, wandering through Plaza de Mayo and past the pink-walled Government House, Casa Rosada, cathedral and old town hall. Hungry? This is the perfect time to stop at a little empanada street kiosk to refuel.

Take a ride on the Buenos Aires subte (subway) to Saenz Pena. From here it’s just a short walk to Barolo Palace, which was once the tallest building in South America and still offers incredible city views from the 22nd floor. Grab a bite to eat for lunch then find a bus that goes along Avenida del Libertador. Get off at street number 2000 and walk up the hill to the famous Recoleta Cemetry. The graves are like tiny, elaborate cathedrals and it’s home to some incredible examples of Egyptian Art Deco and, surprisingly, a number of resident cats.

By now locals will be knocking off work and starting to unwind in hip Palermo, which is full of bars, clubs and restaurants. We think you deserve a rest too, so sit down to enjoy a plate of the world’s best steak and a glass of Malbec as the city comes to life around you. Things really start to kick off after dark, and most boliches (nightclubs) don’t even get busy until after 2am. Start with some pre-drinks at Podestá then dance until dawn under the glittering disco balls at Rosebar or Unicorn Huset.

There’s a lot to see, and even more to eat, so start the day with a stroll through Parque Kennedy in Miraflores. Head down to the beach for breakfast and coffee at La Rosa Nautica on the pier, then check out the ancient ruins of a ceremonial site at Huaca Pucllana. Keep walking along the Pacific Ocean until you reach the bohemian Barranco district.

Wander through the Bajada de Baños and check out the awesome street art, particularly along streets like Calle Cajamarca. Take a stroll along the Saenz Peña Boulevard for clifftop views over the Pacific. This is also a great way to work up an appetite, so catch a taxi up to the San Isidro district for lunch. It’s a little more upmarket than Barranco, and designer boutiques are the place to get your retail fix. Try Cosme or Jose Antonio for some of Lima’s best food, it’s worth the splurge.

Spend the afternoon exploring Barranco’s many museums and art galleries, including M.A.C (Museum of Contemporary Art) and one dedicated to the work of Lima’s own Mario Testino (M.A.T.E). As the sun goes down, why not make your way back to Miraflores for dinner. Wander the food stalls of Parque Kennedy or try some traditional Peruvian food at Anticuchos Grimanesa then hit Manolo for a dulce de leche churro (or two). For a night of pisco sours and dancing, it’s back to Barranco district. Try the Orient Express Restobar, La Noche or El Dragón.

Start things off in the beating heart of Bogotá, the Plaza de Bolivar in La Calendria. You can get a real feel for the city while watching locals go about their day. While you’re there, check out the world’s biggest collection of pre-Hispanic gold work at Museo del Oro. Stop by iconic hole-in-the-wall La Puerta Falsa for its famous chocolate completo - a mug of hot chocolate that you drop chunks of cheese and bread into.

Taxis are a quick and affordable way to get around, so download an app like Tapsi or Easy Taxi to save time. Head north to Chapinero district, which is one of the oldest in Bogota and filled with some of its best restaurants, architecture and boutique shops. Grab another taxi up to the little village of Usaquen, with its cobblestone streets and flea markets. Enjoy a long lunch at Balsamico café with its live music, then wander across to La Rosconeria and choose from 30 different sweet and savory roscones (ring shaped pastries).

Spend the rest of the afternoon back in the historical heart of Bogota, as there really is so much to see. Take the train or funicular to the top of Monserrate Hill and get a real feel for just how big this city is thanks to incredible views. Watch the sun go down, then head up to the funky little district of Chapinero Alto as night falls. It’s not as posh as Chicó and Zona T in the north, and is home to some of the city’s best coffee (visit Casa Rosa to find out why). Grab dinner and a craft beer at Salvo Patria then settle into Mai Lirol Darlin bar to see where the night takes you.

Let’s start at the top. Make your way to Cosme Velho station and head up Corcovado Mountain to see Christ the Redeemer and get a good look at the city below. Once you’ve got your bearings (and you’re ready to escape the crowds) back down through the rainforest then get the subway from Paineiras station back to Cosme Velho. The Metro subway system is a cheap and fast way to get around (it’s also air-conditioned), so don’t be afraid to jump aboard. Downtown Centro district is a good place for a spot of culture. Get off at Cinelândia station to check out the Biblioteca Nacional (National Library) and the Theatro Municipal. For some great colonial architecture, wander along Travessa do Comércio, one of the oldest alleyways in Rio. There are also plenty of churches, museums, and sculptures around the main plaza.

For lunch, escape the bustle and head up into the hills to bohemian Santa Teresa, with its laidback artsy vibe. Chill under the palm leaves at Aprazíve or grab a Caipirinha and a plate of feijoada at Bar do Mineiro. Next it’s time to hit the beach. Grab the Metro to Botafogo station and jump in a cab to Praia Vermelha, a calm and idyllic stretch of sand under the shadow of Sugarloaf Mountain. Dry yourself off and take the cable car up to the summit of Sugarloaf for an unforgettable sunset. Then it’s on to the district of Lapa for a night of dancing. Try one of the big samba clubs such as Rio Scenarium, Carioca da Gema and Lapa 40° where the locals will show you a thing or two.

It’s easy to get around Santiago, and if you ask us it gets even easier after a few glasses of local wine. For the minute, let’s just start with breakfast. Find a café near Plaza de Armas in the centre of the city and grab yourself a sopaipilla (pastry made from deep-fried pumpkin dough) and a cappuccino. Get your fix of muesums (try Museo del Arte Precolombino, Museo Histórico Nacional and Museo de la Solidaridad Salvador Allende), cathedrals and statues before heading to the Parque Metropolitano de Santiago, the largest park in Latin America.

Walk up an appetite then head to Barrio Lastarria, which has a hipster vibe with great coffee and little street markets. From here you can walk up Cerro Santa Lucía, the remains of a 15-million-year-old volcano, and get views of the city below. It’ll take you less than half an hour to walk to Mercado Central for lunch, and it’s well worth it. It’s impossible to describe how much food there is on offer, so just try to squeeze in as much seafood and empanadas as you can.

Get a bit of retail therapy then it’s off to Barrio Bellavista where we think you should spend the rest of your night. It’s full of colourful buildings and laidback locals, with tree-covered Cerro San Cristóbal, as a natural backdrop. Stop by La Chascona, the zany former home of Noble prize-winning poet Pablo Neruda. By now you’ll be ready for that wine, so grab a chair at one of the pavement bars along Calle Pio Nono and wait for the party to start. 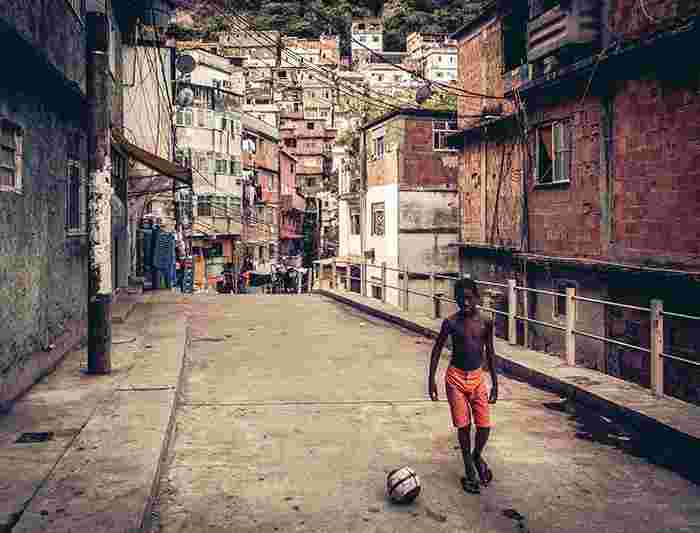 See a different side to the modern city of Rio, and meet the locals who call this favela home. Santa Marta is a sprawling maze of alleyways with wooden and brick houses stacked on top of one another. Learn about the favela’s history, see some awesome street art and a bronze statue of Michael Jackson (he filmed his video for ‘They Don’t Care About Us’ here) while getting incredible views of the city below. 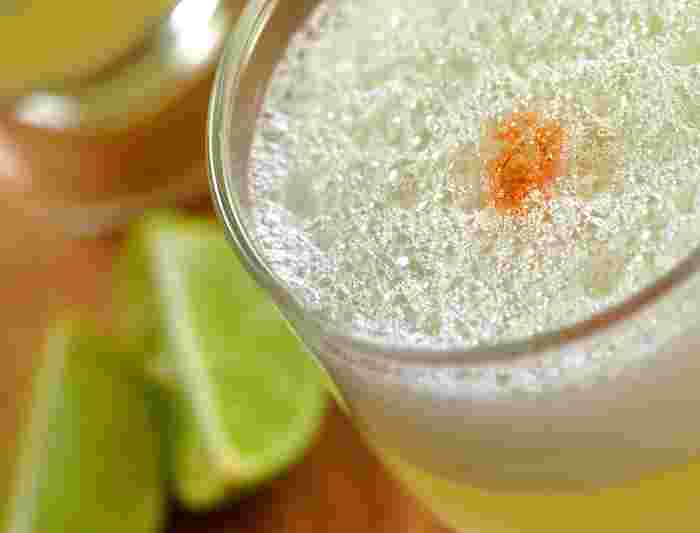 We know that your first and most important question is: “Will I get to drink Pisco Sours at the end of this tour?” The answer is a resounding “YES”. Wander around Cusco, learn some history, hit the markets, buy the ingredients, mix them up like a master then settle in for an afternoon of pisco-related fun. The more you make the better you’ll get so don’t stop at just one. 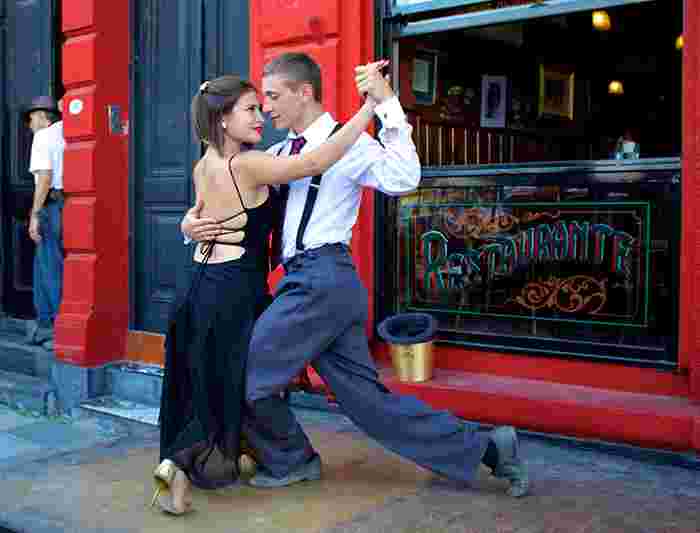 After sitting down over coffee to learn the history of tango, your local guide (who is also a bona fide tango dancer) will take you inside some of the city’s hottest milongas (dance halls). Learn some of the secret codes shared by milongueros (tango dancers) and sip a glass of malbec as they burn up the dancefloor. Don’t be shy, get up there and join the fun!