Home » Learning the art of no worries in Belize
FeaturesStories

Learning the art of no worries in Belize 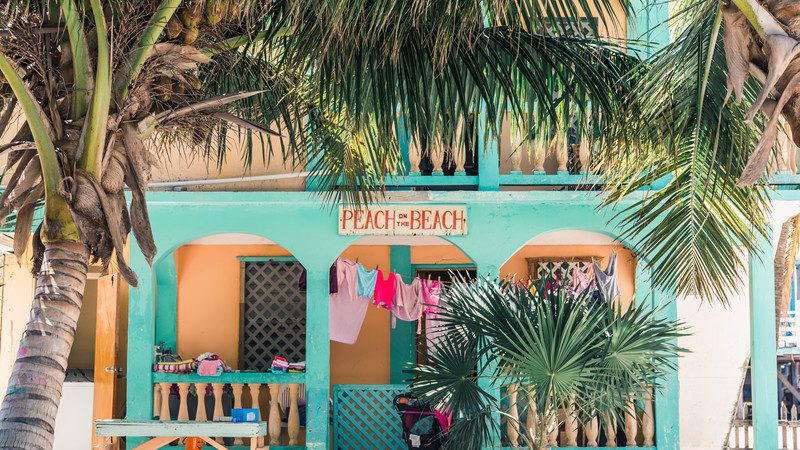 ‘The menu is verbal, man; tonight we got jerk chicken, grilled lobster, or prawn coconut curry. Help yah-self to beers in the bathtub’.

As I sit myself down at a picnic table and contemplate the tough decision of what to eat for dinner, Bob Marley and the Wailers drum away serenely in the background, reminding me all that every little thing is going to be alright. As I crack open a cold one and let Wish Willy (yes, that is actually his name) know that I’ll have the lobster for the exorbitant price of $15, I think to myself: have I discovered paradise on earth? 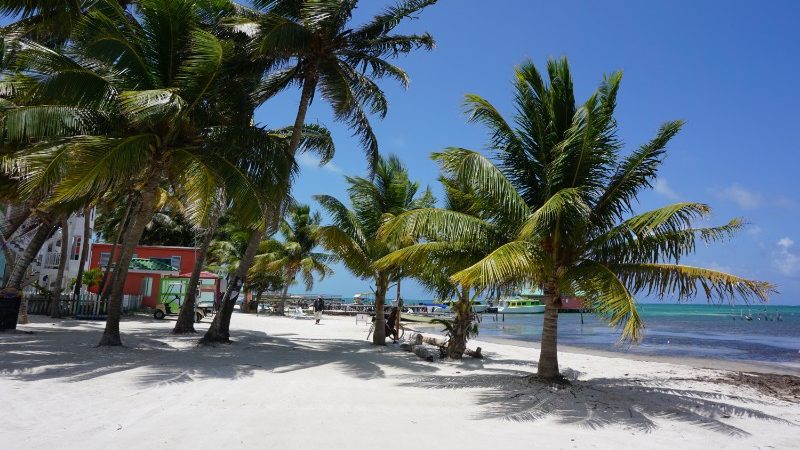 I am on Caye Caulker, a teeny cluster of islands off the coast of mainland Belize, halfway through a 46-day journey from Mexico City to San Jose in Costa Rica on Intrepid’s Epic Central America tour. These islands are largely populated by a cruisy community of Kriol, a proud people who relish their strong ties to the Afro-Caribbean and Rastafarian cultures. Only 48 hours prior to this preposterously affordable lobster, I was in Mexico surrounded by Latin beats, colonial towns, and Spanish; all the things one would expect to find on a trip to Central America. But then I crossed into Belize. With a stamp of the passport and a cross of the border, people all of a sudden spoke English, the queen flashed me a cheeky smile from the currency, Chinese grocery stores lined the streets, and Rastafarians and Amish were brushing shoulders on the street with neither group thinking that the scenario was unusual. It’s these extraordinary situations which, to the locals seem so ordinary, that makes Belize so unbelievable.

You don’t often hear of people coming specifically to Belize. Sandwiched between two Central American powerhouses, many decide to jump directly from Mexico to Guatemala on the gringo trail. Upon arrival in this nation, I soon realise what a mistake this is. There is a breezy easy-going nature to its inhabitants, with Caribbean culture saturating deep into the fabric of Belize society. For me, the relaxed pace comes as a welcome break after weeks on the road in Mexico. I’ve swapped out the tequila for rum punch, salsa for reggae, tacos for Johnnycakes, and my holas for hellos. 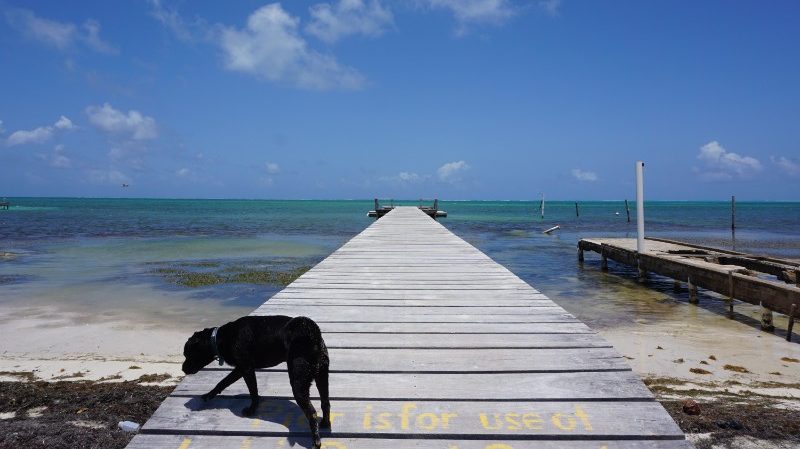 Here on this tiny island in the Caribbean, there are no cars, no fumes, and absolutely no worries. Rather, there are swaying palm trees, plenty of hammocks dotting the shore line, crystal blue waters, with the only concern being hit by a rogue coconut as it falls from the tree (a definite concern).

RELATED: WHAT A TRIP TO BELIZE IS REALLY LIKE, IN 23 BEAUTIFUL PHOTOS

My evening meal at Wish Willy’s follows a busy day by island standards. An early start saw me and my travelling companions boarding a catamaran and bee-lining for this famed barrier reef. It was a strenuous day of snorkelling some of the world’s best quality reefs – specifically the Hol-Chan marine reserve – spotting nurse sharks, manatees, eagle rays, and all manner of fish, followed by a fresh seafood lunch, then afternoon ceviche and rum punch. We are at Willy’s recovering our lost energy and prepping for another tough day on the island. Hammocks and books are on the agenda. 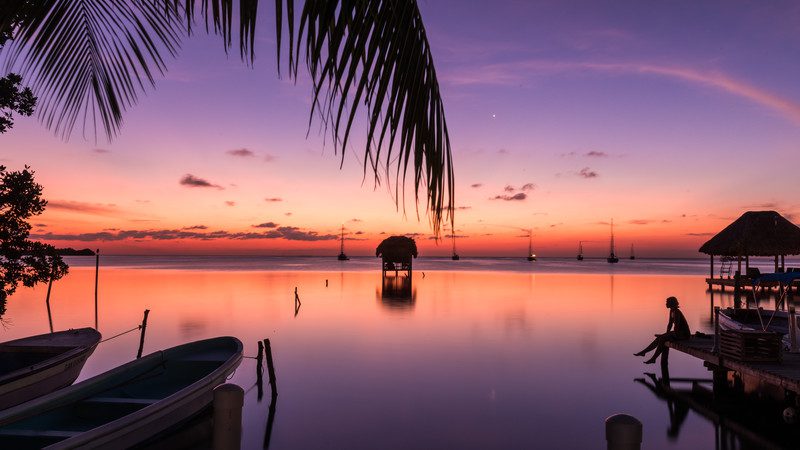 As I sit in the makeshift barbecue restaurant (in what I am sure is Willy’s personal backyard), I am relieved to hear familiar words of the English language after weeks of Spanish. As a member of the Commonwealth, Belize is the only English-speaking country in Central America. However tonight at the restaurant, I can hear a symphony of languages being exchanged by the locals; Kriol is most common, however a friendly local draws my attention to a couple speaking African-based Garifuna, another group speaking Maya Mopan, and children chattering in Mandarin. Willy jumps in and lets me know that he and his family speak German too.

RELATED: WHY BELIZE’S CAYE CAULKER IS THE DEFINITION OF PARADISE 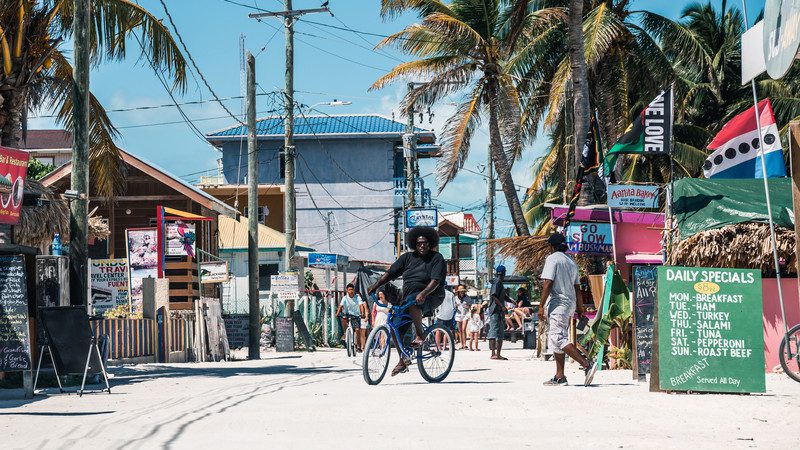 This is what I find most fantastic about this little country. It is the lowest populated country in Central America with a mere 14 people per square kilometre, yet despite this low density, it’s a melting pot of colourful cultures. Mayans, Mestizos, Kriols, Garifunas, East Indians, Mennonites (akin to Amish), Arabs and Chinese all call Belize home. For many who visit this little slice of paradise, the welcoming and multicultural locals are a standout highlight.

Following the lobster feast, complete with coconut rice and coleslaw, I find that my Belekin beer is empty. Before I can get myself over to the bathtub to go for a second, Willy’s friendly dreadlocked friend beats me to it and hands me the drink. ‘No worries maan’ he smoothly comments as he cracks open the top, reaffirming my belief that the locals on Caulker might just be the most unperturbed people on the planet. 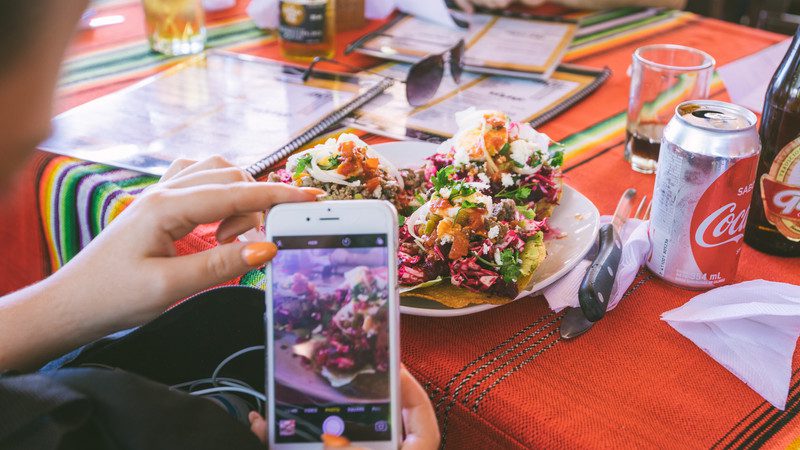 Since my time in Belize, I have returned home to the hustle and bustle of my everyday life. Despite promising myself that I would emulate those cool Caye Caulker vibes to be more chill and to do as the locals do, I have found myself slipping into the daily grind, with the little Caribbean island a mere distant memory. However, as my home city sweeps me into its frantic chaotic rush, I on occasion remind myself to slow down, to ‘take it easy man’, and to think what would Wish Willy do in this situation. If there were more Belizean Willy’s in the world, I’m sure it would be a much more peaceful, harmonious and tolerant place.

Ready to master the art of no worries? Check out Belize on a small group adventure now.

Jacqui Dunlop – a policy officer from Canberra, Australia – is a keen hiker, wine-drinker, and closet travel writer. Her appetite for globetrotting has seen her mountaineer a 6000 metre peak in Bolivia, study gender relations in Sweden, surf badly in Sri Lanka, ride camels in Iran, and eat deep fried chilli crickets under the Mexican sun. She is happiest on the road with a backpack in good company.